Ram cichlids for your fishtank: How to keep Ramirezi?

Ram cichlids in the fishtank: how to keep Ramirezi?

Dwarf cichlids are popular aquarium inhabitants. No wonder, after all they bring life into every fishtank due to their great colouring and interesting behaviour! Among the most popular dwarf cichlids for aquariums are the ram cichlids, also known Ramirezi or in Latin as microgeophagus ramirezi.

Where do ram cichlids occur?

Ramirezi are South American dwarf cichlids. They can be found in large parts of Colombia and in savannah areas of Venezuela. There you can almost always find them in small standing waters of grassland. It is also native to the shores of warm streams. The typical biotope of the ram cichlids is a planted, muddy river bank, which is characterised by bog wood roots and other hiding places.

Which water values and which temperature do ram cichlids need?

The butterfly cichlid is a sophisticated aquarium fish in terms of water quality. You need to be able to offer him the following water values.

As you can see from the above water values, the Ramirezi likes it very warm. It feels comfortable at temperatures of up to 30°C, with 27°C being the most suitable. Since the  ram cichlid in the wild can be found at bank zones of small, calm waters, the Temeratur may fluctuate during the day even gladly around 3-5°C. The home of the sensitive animals, the steppe waters, are also characterised by a very low general hardness and a low carbonate hardness. Values of 6-8 °GH and 5 °kH should not be exceeded here. Such a low general hardness rarely comes from US taps.

How do you keep ram cichlids in the aquarium?

The ramirezi is held in pairs. Starting from a tank length of 20-24 inches, thus usually a volume of 15-20 gallons one can think about keeping a pair. In larger aquariums, starting from an edge length of approx. 36 inches, one can also hold several pairs of ram cichlids. The aquarium should be very structured. From bogwood roots, to stones as decoration, to clay caves or coconut shells, everything that can be used by the Ramirezi as hiding place or territory delimitation is gladly accepted. In addition, one should rely on a dense background and ground planting, but at the same time leave the animals room to swim. South American slow-growing plants are particularly suitable for keeping Ramirezi. Under no circumstances gravel should be used as a substrate. The animals wash sand through their gills while eating and can injure themselves with coarse gravel. They also need sand for hygienic reasons, as they flush it through - this can be imagined as a kind of filter system. My recommendation is dark sand. This gives the animals an even more intense glow.

Butterfly cichlids are no beginner fish, even if they are often advertised as such in aquarium shops. As already described above, their demand on water is very high. The animals are also very sensitive and susceptible to disease. Particular attention should be paid to weekly partial water changes, especially in small 15-20 gallon tanks. Already slightly increased nitrite values, which could not harm the other aquarium inhabitants, can quickly lead to the death of the animals.

Typical Ramirezi biotopes always flow very slowly. For this reason, care should be taken not to create too strong a flow with the filter. Again it is of course important to consider the preference for calm waters of the butterfly cichlid when choosing the additional fish stocking. One should therefore not socialize any flow-loving species with the Ramirezi.

Ram cichlids and which fish?

Since Ramirezi mark out and defend territories on the ground, no other bottom-near aquarium fish should be kept, especially in small tanks. Above all catfish should not be considered in any case. In addition, aggressive and very lively species such as barbs or loaches should be avoided in any case. The calm and gentle ram cichlids are easily stressed and suffer. Small south American tetras, such as the red neon or fire tetra, are particularly suitable for socialization. These can occasionally be found in the native waters of the Ramirezi. You will find many stocking examples the ram cichlid in our guide! 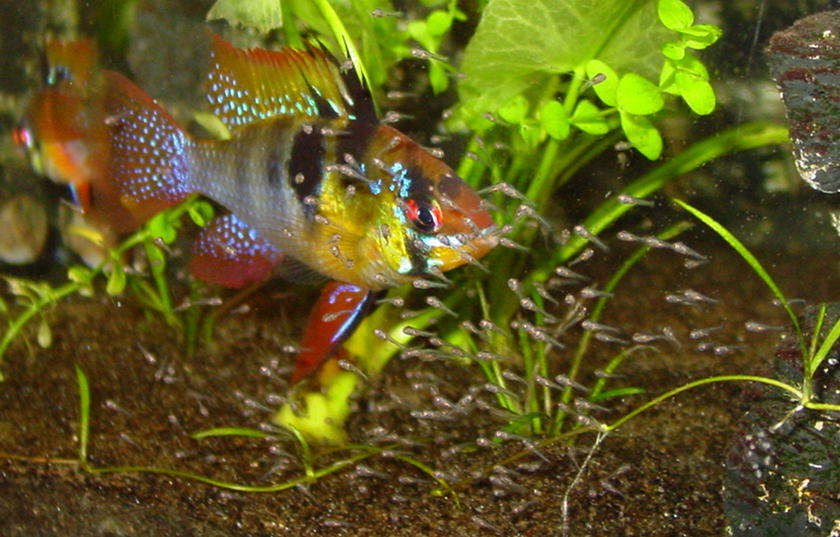 What does the ram cichlid eat?

Like other dwarf cichlids, the Ramirezi should occasionally be fed with live or frozen food. This not only stimulates the colouring of the animals, but also contributes significantly to the well-being of the ramirezi and their hunting instinct. White or red mosquito larvae, but also crustaceans such as Artmia, water fleas and Cyclops are gladly accepted from the ram cichlid and are important for its development. If only dry food is available, I recommend Tetra granules. The high-quality dry food contributes to the colouring of the fish and is easier to dose than flake food.

How do you breed ram cichlids?

For the successful breeding of the Ramirezi it is very important to choose a harmonizing pair at the time of purchase. Like us humans, ram cichlids will not get involved with a partner they don't like. Instead, especially the larger and stronger males will chase the female all day long if they do not like her. A calm tank with as many stones and bog wood roots as possible should be made available to a harmoinising couple. Ramirezi are open breeders who lay their eggs on the decoration. They clean the root/stones meticulously beforehand by removing each grain of sand with their mouths. It is also very important that the animals are not disturbed during their intensive breeding care. If other ground-near inhabitants, like for example armored catfish, swim permanently into the precinct of the animals, these will break off the brood-care after a short time and will possibly even eat the eggs themselves. As with most small fishtank inhabitants, the offspring should be fed initially with small Artemia nauplii.

How old will the ram cichlid be?

Like most dwarf cichlids, the Ramirezi does not have a particularly long life expectancy. In aquariums it usually lives 2-3 years. In the wild, the ram cichlid grows older than in captivity, but it develops a more pronounced splendour of colour in the aquarium. If the ram cichlid is bred intensively, its life expectancy is reduced even more drastically. It should also be ensured that the animals are susceptible to chemicals. These also significantly reduce the life expectancy of the animals.

More facts about the ram cichlid:

The ram cichlid is available in many different breeding forms, which do not differ from each other in their behaviour. Very popular breeding forms are for example the Electric Blue and Gold ramirezi. It is often said that these forms of breeding are even more susceptible to disease and poor water conditions, but this is not scientifically proven and in my personal case also not true.

The Ramirezi is a small South American dwarf cichlid. The male grows up to 6cm tall and is characterized by a more splendid coloration and clearly larger anal and dorsal fins. Ram cichlids are kept in pairs in aquariums of 15-20 gallons or more and like structured fishtanks that offer sufficient hiding places. Ramirezi are no beginner fish. Their demands on the water is very pronounced. In addition, the water it needs must be very soft. They can be very well socialized with other small and peaceful South American fish, like the cardinal tetra or for example the red of Rio. Breeding is very easy if you take care to choose a harmoinising pair when purchasing.

Ram cichlids in a Video

Ram cichlids for your fishtank: How to keep Ramirezi?

Keeping Otocinclus in the Aquarium – Here’s How it Works

11 Aquaristic beginner mistakes, which you should avoid in any case!

Keeping Zebrafish in the Aquarium – This is How it Works

Keeping Tiger Barbs in the Aquarium – here’s how it works

The black phantom tetra – The ornamental fish for home

Keeping Danio Margaritatus in the Aquarium – This is How it Works

Keeping Moss Barb in the Aquarium – This is How it Works

What fish for your tank? - Discover setup idea for you fishtank!

Setup your fishtank - visit our step by step guide!

EN
In order to provide you with an optimal experience, we use technologies such as cookies to store and/or access device information. If you agree to these technologies, we may process data such as browsing behavior or unique IDs on this website. Cookies are used for ads personalization. If you do not give or withdraw your consent, certain features and functions may be affected.Okay!read more in my privacy policy