How many Amano shrimps can you keep in your fishtank?

How many Amano shrimps in the fishtank?

Aman shrimps (Caridina multidentata) are among the most popular shrimps in the aquarium. No wonder, as they are easy to socialize with other fish and invertebrates, because they are very peaceful and have very low demands on water quality. With an average size of 5cm, the Amano shrimp are in no way suitable for small "shrimp aquariums".  The Amano shrimp has made a name as an algae-eating invertebrate in aquaristics. In fact, unlike relatives such as the blood Red Fire Shrimp or the Bee Shrimp, Amano shrimp are particularly effective at destroying algae. Of course, they should not be seen as a miracle weapon either. Effective control of algae requires more than one shrimp. Starting from 20-24 inches edge length (20 gallons fishtank) one can hold a swarm of Amano shrimps. But how many Amano shrimps are the right number? - The following table provides information.

How many Amano shrimps in the aquarium - on what does the number of animals depend?

As already mentioned, the 20 gallons aquarium is a minimum for the 5 cm tall Amano shrimps. Here one should take the swimming ability of the animals into consideration and use correspondingly fewer Amano shrimps in such small fishtanks. It becomes even more critical, if there are already species in the tank that live near the ground area are as well. Amano shrimps are spawn predators. For this reason, special consideration should be given to species spawning on the ground, such as ram cichlids. If you already have such species in a 20 gallons aquarium, you should not consider keeping Amano shrimp at all. The animals suffer from stress that can quickly lead to their death. Otherwise, the Amano shrimps can be well socialized with almost all aquarium fish.

If the tank becomes larger, the number of amano shrimps can be increased accordingly. Especially with large tanks, in which 25-30 animals can be kept, the swarm behaviour of the animals can be observed particularly well. Not rarely, the other Amano shrimps then follow a "leader" and graze the aquarium plants together. The size of the other aquarium inhabitants should be taken into account. With only 5cm in size the Amano shrimp can be considered as food for lager fish, which you can keep in 65+ gallons fishtanks.

In forums one often reads about the fact that even in mid-sized 50 gallons aquariums you can keep up to 40 Amano shrimps. Such quantities are not recommended for the other inhabitants of the fishtanks. When it comes to feeding, aman shrimp can become aggressive and do not even shy away from larger species. In this case the shrimps would literally suppress the other aquarium fish and they are exposed to permanent stress. 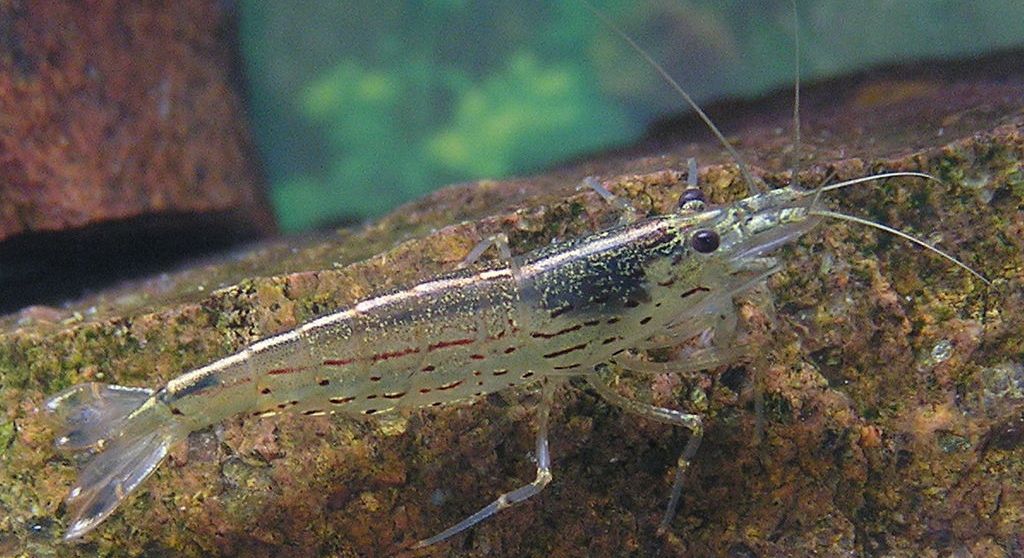 Amano shrimps are, as already described above, very undemanding aquarium inhabitants when it comes to the water quality. Not surprising when you know that the Amanos can be found not only in fresh water but also in brackish water. In the two completely different biotopes, the total hardness can easily vary by up to 10° dGH - unthinkable for almost all other aquarium fish!

How many Amano shrimps can you keep in your fishtank?

Keeping Otocinclus in the Aquarium – Here’s How it Works

11 Aquaristic beginner mistakes, which you should avoid in any case!

Keeping Zebrafish in the Aquarium – This is How it Works

Keeping Tiger Barbs in the Aquarium – here’s how it works

The black phantom tetra – The ornamental fish for home

Keeping Danio Margaritatus in the Aquarium – This is How it Works

Keeping Moss Barb in the Aquarium – This is How it Works

What fish for your tank? - Discover setup idea for you fishtank!

Setup your fishtank - visit our step by step guide!

EN
In order to provide you with an optimal experience, we use technologies such as cookies to store and/or access device information. If you agree to these technologies, we may process data such as browsing behavior or unique IDs on this website. Cookies are used for ads personalization. If you do not give or withdraw your consent, certain features and functions may be affected.Okay!read more in my privacy policy